Four Diamonds in the CES 2017 Haystack

Every year, nearly 200,000 people swarm into 2.5M square feet of space in Las Vegas for CES 2017 to see the latest in consumer electronics gadgets. There are the big highlights, like the Faraday FF91, the LG Signature OLED TV W7, smart this, and smart that...but it can be completely overwhelming to try and see everything that is relevant for you. We hold a special event for our members with our parent company, CableLabs, each year to provide them with engaging speakers and showcase interesting technology that has relevance to the global cable/broadband/wireless industry. In addition to FCC Commissioner Ajit Pai, the King of CES Shelly Palmer & Christian Cotichini, CEO of heroX, we featured the four companies below. The UpRamp team worked with these emerging tech startups to create integrated solutions for our CableLabs members in the areas of IoT/Smart Home, WiFi, Smart Sound, and Portable Content Devices. 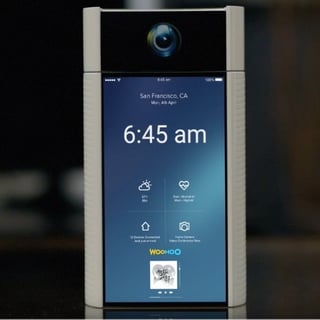 SmartBeings is a startup focusing on the opportunities afforded by the booming Internet of Things (IoT) industry. As we all know,  IoT is growing at an extraordinary rate of 20 percent per year and will be worth $1.7trn by 2020.

Working as a smart home hub, Woohoo can be used as a security camera that has inbuilt Android so that it can be used to make video calls. Connecting to Wi-Fi, Bluetooth, Zigbee, Z-Wave and more, WooHoo even has cellular signal and a backup power source.

Lastly, WooHoo boasts an Echo-like functionality that will listen for a “wake word” that on utterance will allow users to control their smart homes. Since it can recognize faces and voices, users can even build personalized commands. 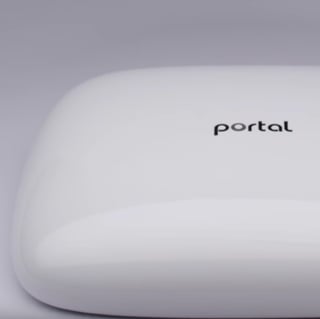 Ignition Design Labs is a team of veteran wireless networking engineers who are working to develop radical technologies at the heart of IoT technology. The flagship product Portal is an entirely new class of agile smart-learning router designed for demanding urban lifestyles. It has been supported on Kickstarter by 4,562 backers, who have pledged a combined $791,862.

Portal operates on exclusive, uncrowded FastLanes channels that leverage 2.5 times more spectrum than any consumer WiFi today. Of course, more spectrum results in more speed, more coverage and an ultra-reliable - and secure - Internet experience. Together with SmartLanes dynamic traffic avoidance, Portal delivers consistent UltraHD WiFi in even the most challenging congested environments. Best of all, Portal works seamlessly with the WiFi devices you already own.

Portal solves the issue of WiFi’s hamartia. Popularity due to flexibility has resulted in WiFi data usage increasing 100 times in five years, with technology struggling to keep up. Billions of WiFi devices now compete for limited radio airwaves, causing invisible traffic jams and congestion, making WiFi slower and more unreliable than ever.

Portal is the first and only router specifically engineered to cut through and avoid congestion, delivering consistent, high-performance WiFi with greater coverage throughout your home. Portal’s proprietary spectrum turbocharger technology provides access to 300 percent more radio airwaves than any other router, improving performance times 300 and range and coverage by as much as times two.

We ordered. How can one resist? 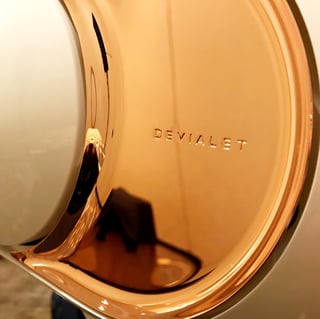 Phantom, from French company Devialet, is in an audio class of its own. This implosive sound is identifiable by the silver or gold domes of its side-firing bass drivers. It’s more expensive than partner models but, with an impressive internal power of 4500 watts, this music device is capable of generating sound levels of 105 decibels without distortion, saturation, or background noise. The clarity comes from Devialet’s ADH® invention, which combines Analog amplification (Class A) and the power and compactness of the Digital amplification (Class D). And the bass, well, let’s just say that they have a patent on Heart Bass Implosion HBI®, and you just have to experience it to believe it. Just one Phantom speaker can replace an entire room's worth of surround sound audio equipment. It will blow you away.

Weighing 11 kilograms, the phantom has dimensions of 253 x 255 x 343mm (based on width, and depth). As well as generating some truly loud sound levels, the music system has internal DAC and WiFI streaming of up to 24-bit/192kHz and supports a wide range of formats, including MP3. Configurable for mono or stereo, the system has both ethernet and optical input options.

This beauty will blow you away! 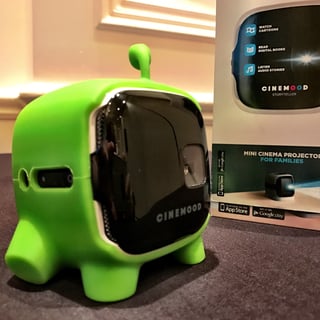 CINEMOOD created The Storyteller,  the first mini cinema with child-friendly, pre-installed content for families. Developed by tech professionals, product designers, advertising and content experts, CINEMOOD believes in the magic of everyday moments and that, despite the dividing lines between digital natives and the generations that came before them, family time is still as important as ever.  They are projecting magic!

CINEMOOD’s Storyteller projector doesn’t use blue light (emitted by your ) so children’s bio-rhythms aren’t damaged by reflected light. The device is portable so you can have outdoor movie night (100” screen!) or take it on the road. It’s and WiFI enabled and quiet as a mouse. The best part is that you are in control of the content!

The product raised $150,000 raised on Indiegogo after 2 months - 200 percent more than the target - and the company sold 3,000 units in nine months on the European market last year. If that wasn’t enough, CINEMOOD was also declared the winner of Startup Village, 2016 and one of the best tech gadgets for kids at CES 2016 per Mashable.

We love that they turn gadget time into family time.

All four of these companies have so much potential to have a dynamic impact on our connectivity, and entertainment. From a consumer standpoint, try them out!  From a business perspective, imagine the possibilities of integration!